After ten years without lighting, the SOS children’s village in Hawassa in Ethiopia is now self-sufficient in power and lighting. Solar, Engineers without Borders and SOS Children's Villages solved the job with great support from the locals.

The sweat is dripping from Jacob Mortensens face as he struggles with a technical installation in the Ethiopian village Hawassa. He is a climate and energy specialist at Solar and responsible for a project that will provide power and lighting to the locals who haven’t had any lighting for the last ten years.

A group of locals gathers around the garland-decorated stand that holds the newly installed solar panels. The pressure is on. Four minutes later, everything starts up. 16 houses now have lighting, and the big photovoltaic system is up and running. Suddenly, a mother stands up, interrupting the opening ceremony. She insists on thanking everyone for their help, because nobody can be happy without lighting, as she says.

- That really touches me, says Jacob. He has been taken by surprise by how the people have grown accustomed to going without lighting. And by how much lighting actually means to them.

- Lighting with dimmers, switches and designer lamps are common to us. But these people have not had lighting for 10 years. It’s two completely different worlds, Jacob admits.

A problematic beginning
Things were not as bright when Solar, Engineers without Borders and SOS Children Villages began the project 14 days earlier. The crew ran into problems the very first day when it turned out that one of the solar cell batteries was broken. Quite a problem since the installation only could work with all 24 batteries.

- We ended up fixing the battery, which turned out to perform as well as all the others. I must say I was relieved – and not least proud, Jacob remembers.

A ladder made of chairs and five people to one lamp
When it comes to tools and equipment things were not like back in Denmark either, Jacob admits. The man hired to weld the solar cell stand only had what seemed to be a prehistoric welder and no welding screen.

- The electrician apprentices had never before installed a motion sensor, and there were a group of ten locals working on a single sensor in just a few square metres. When they finally got the first one to work, it made them jump up and down, run around and cover me in hugs, Jacob says laughing as he shows pictures of five men gathered around a single ceiling lamp. They don’t have any ladders, only a couple of chairs stacked on top of each other.

- It’s just a completely different world. But they are very eager to learn, and they have a lot of respect for the fact that I’m able to show them as well as do it myself. It’s important that they don’t think of me as just a stupid white man with a funny hat, Jacob says. 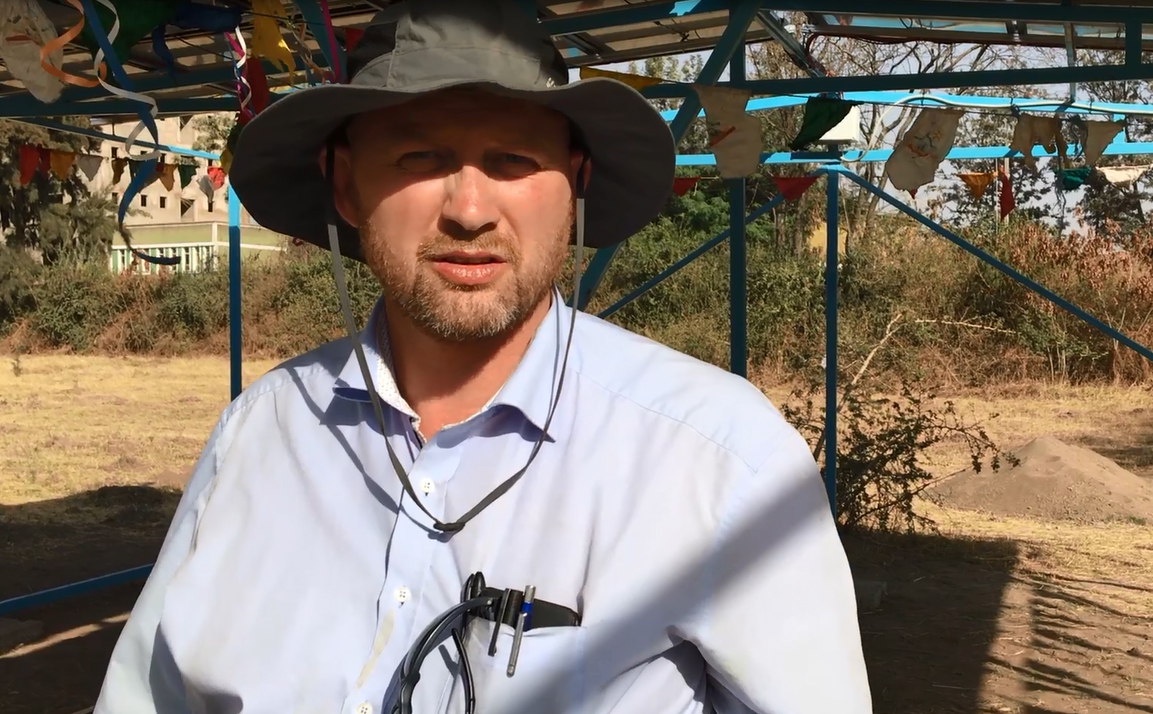 Back in Denmark, Jacob is left with an exceptional feeling.

- I really feel that Solar has made a difference for these people. It has also made me appreciate the possibilities we have here in Denmark. We’re able to just fix whatever needs fixing. Now, I’m definitely not the one to complain about the crack between my floor boards.

The Solar cell installation consists of 40 280 watts monocrystalline solar cell panels from Hyundai. The lamps are from Solar Plus.

Our partnership with SOS Children's Villages

Read about the project