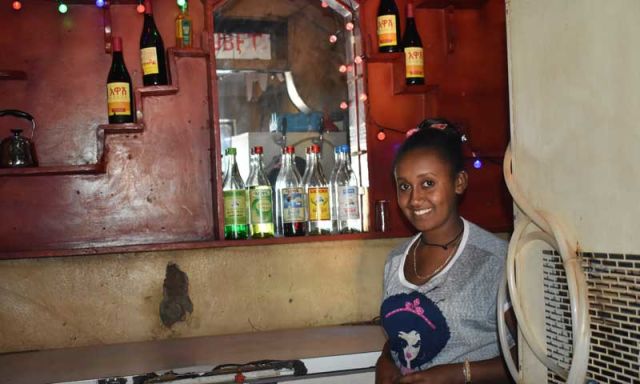 18-year-old Mudaye Birhanu comes from the village Kebado in the southern region of Ethiopia.

Her childhood home was characterized by a father who drank too much. Her father’s drinking problem led to daily confrontations with Mudaye’s mother.

Sometimes, the loud arguments ended with the father getting violent against Mudaye’s mother. When she couldn’t take it anymore, the couple separated. But the father was still their main source of income, so when he died, Mudaye, her mother and her younger brother were in a very dire situation. They no longer had money for food or basic necessities.

Mudaye was in sixth grade, but she more or less had to drop out of school in order to help out with the family’s economy. While the mother went from house to house, offering to wash people’s clothes, Mudaye started selling coffee.

“I had to help. At least, I needed to cover my own expenses”, Mudaye explains.

Mudaye went to take her finishing exam in 10th grade, which should grant her access to further education. But in the years after her father’s passing, she barely attended school and it was impossible for her to catch up. Even though a teacher lent her money, so she didn’t need to sell coffee in the period where she should study for the exam, she still failed in the end.

Her opportunity to educate herself further was gone.

But thanks to the support of Solar and SOS Children’s Villages in Ethiopia, Mudaye now have access to further education. Today, she studies “Hotel and Tourism” at a school in the city Dilla, which offers educations and certificates in technical and vocational professions. Mudaye says that she is especially interested in customer service.

“It’s a hands-on course, where they teach us how to greet customers at the front desk, get them registered and so on. I really enjoy those classes”, says Mudaye. She also explains, that “getting the opportunity to get an education, was a matter of life and death to me”.

Mudaye hopes to get even more experience as an employee at a popular restaurant or in a hotel. She dreams about opening her own fast food restaurant one day. She would like to be a role model to others. An example of how it is possible to overcome poverty.

In her spare time, Mudaye likes to read and then she volunteers at Red Cross. In the weekends, she visits her family in her hometown. She helps out her mother in the house and assist her younger brother with his homework.

Solar Polaris Get paid by the sun

With a service life of more than 30 years, solar panels turn the sun into an inexpensive, sustainable energy source. Solar Polaris gives you the opportunity to save money and contribute to a sustainable society.

Check out our list of other CSR related news. You'll find anything from Rhinos at the Zoo to solar powered CEOs on longboards.

Our long term cooperation with SOS Children's Villages has lead to sustainable energy sources in both Zanzibar and Ethiopia.

Read about our work